An unofficial website devoted to actor and musician Jeremy Renner

Photos from the Aiding Austalia Benefit have been added to the gallery. 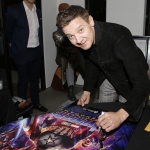 Follow @awardsfocus on twitter for a chance to bid on some items that Jeremy signed during the benefit.  All proceeds go to the Port Macquarie Koala Hospital.

Photos from Super Bowl LIV have been added to the gallery. 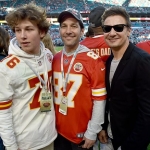 On behalf of everyone at JLR.com, we'd like to wish Jeremy a very happy 49th birthday!

Happy 2020 everyone! As always, we’d like to thank you for visiting our site over the past year. 2019 was a great year for Jeremy, with Avengers: Endgame becoming the highest-grossing film of all time, and his finally releasing some of his own music! Here is a what we might see from Jeremy in the coming year:

First, while there has been no official confirmation, we may see a third season of Knightfall, produced by Jeremy, on The History Channel later this year.

Second, Jeremy should begin filming Hawkeye for Disney+ later this year, with a release date of Fall 2021. He may also begin recording some voiceover work for What If . . ., another Disney+ series that debuts in 2021.

Third, we know that Jeremy is still attached to star in Spawn, and Todd MacFarlane has stated that the film is still happening. We do not yet know when filming will begin, but we are hopeful that it will be some time this year.

Another possible appearance will be in Black Widow, Marvel Studios’ next feature film. While there is no confirmation that Jeremy will make an appearance, Hawkeye’s close relationship with Black Widow makes it very possible he could appear at some point in the film. Black Widow will be released on May 1, 2020.

There have also been rumors that Jeremy could appear in Mission Impossible 8, reprising his role as William Brandt. We do not know when it will begin filming, but we do know that it will be immediately after Mission Impossible 7. We will let you know if we get official confirmation of Jeremy’s involvement.

Other projects that may or may not still be in development are the Doc Holliday biopic Doc, the animated film I.F. (Imaginary Friend), the Bill Caswell biopic Slingshot, and the fact-based heist film King of Heists. As always, we will post updates if an when any new information is released regarding these or any other projects. And of course, we would love for Jeremy to release even more original music this year! Fingers crossed. 😊

We hope everyone (but especially Jeremy!) has a wonderful 2020!